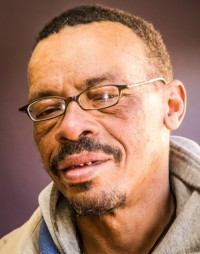 On a sunny autumn day, Kasey Childress wears a gray “Arizona Wildcats” sweatshirt, jeans, glasses, and a leopard skin fedora with brown trim. His face shows the miles he has traveled, both literally and figuratively. He asks to sit in the shade for the interview. More on this later.

Kasey was born at the home of his great-grandparents Elijah and Mattie Frazier near Marvell Arkansas, a small town located not far from the Mississippi River in central Arkansas. Elijah was a farmer and raised cotton, rice, and soybeans.

He spent his summers on the farm, but at the end of each summer, he took the bus to Chicago, where he lived with his mother Lucille Childress and attended school.

As quickly as school let out for the summer, Kasey hopped another bus back to Arkansas, where he spent his summers climbing trees, playing football, and fixing small engines. Over the years, he fixed lawnmowers, go-kart engines, and motorcycle engines. Kasey said “it ain’t too hard to fix small engines if you can take your time and figure it out.”

There was one thing Kasey liked even better than fixing small engines. “I’d have to say that cooking is my passion,” he tells me, “and my great-grandmother was the BEST cook. She’s the woman who taught me how to cook. I learned how to make tea cakes and greens and fried chicken and cornbread.” At the thought of that cornbread, Kasey’s face crinkles into a grin. “I don’t get homemade food no more. It’s been a while since I’ve had cornbread.”

Once Kasey starts thinking about food, he’s on a roll. Cooking it, eating it, and talking about it, Kasey just plain enjoys food. Kasey says, “I worked as a cook for over 20 years. I helped make southern food at Val’s food cart on the library mall and at her restaurant too. I had to be up by 4:00 in the morning to get things ready for the day.”

Kasey said there is a secret to making barbecue ribs “so tender it just falls off the bone.” But like all good cooks, Kasey understands that some secrets are meant to stay secret.

“When my grandmother was alive, she wanted me to make my chili. When my mother was alive, she wanted my lasagna.” He has two secrets to the best lasagna and these he is happy to share. “Don’t overdo on the noodles. It’s better to have more meat and cheese. Too many lasagna noodles make it gummy. And for the meat, it’s best to put in six kinds of meat that is when you can find them all.”

He still likes to buy food in Madison’s downtown grocery stores. But since Kasey doesn’t have a kitchen, it’s been a long time since he’s cooked a meal. “The things I love to do that I can’t do no more, I just push those things to the side.”

The conversation turns toward the years Kasey has been living on the street. He says he’s been living on the street about fifteen years and he knows exactly when his troubles began. He talks of working for a time as a resident manager with Madison Property Management (MPM). “But then I got back into drinking alcohol. That was my decline. I didn’t get fired. I just shifted to another phase of my life.”

Kasey talks openly of the complex impact alcohol has had on his life; both how it brought him to the street and why he still drinks. “Drinking… stops the painful thoughts.” Kasey says he has gone through detox and tried treatment. “I’ve stayed sober for a while, but basically treatment is a waste of my time and theirs,” he says. “You can’t do nothing different if you aren’t willing to change your circumstances.”

“I don’t have to be homeless,” Kasey went on. “I could go live with my sister, but I choose not to. I like being independent. I can pick and choose what I want to do and when. I don’t like people telling me what to do.”

“I’ve worked with an alcohol counselor,” he says. “I told him I drink to numb the pain going on in my mind. He told me that when I get sober again, the same problems will still be there. And he’s right. They are.”

Then Kasey shifts topics and starts a travelogue. “I’ve lived everywhere. Sometimes a year here, a few months there.” Kasey rattles off the names of the towns he says he’s lived in: Indianapolis, Indiana; Memphis, Tennessee; Hutchinson, Kansas; Nome, Alaska; St. Louis, Missouri; and Minneapolis, Minnesota. “I had to get out of Minneapolis. It is too cold there.” But he returned to Madison, as Madison is home.

The hardest part of being homeless, Kasey says, is the weather and his skin condition. He says he’s had so many severe sunburns that his nose and face and ears are permanently damaged. “It hurts and burns constantly,” he says. “Kids stare and come up and ask me what’s wrong with my face.”

Kasey says he has gone to a doctor and to the emergency room and they give him creams to put on his skin. “But it don’t help. And they tell me to stay out of the sun. Just how am I supposed to do that?” he asks. “I’m homeless.”

Kasey touches his leopard print fedora. “The hat helps…a little,” he says. “Living on the street is hard. The nights are already getting colder. You have to find a place to take a shower and change your clothes. I guess I’m just stubborn. I don’t want to rely on anybody. So I survive.”

Suddenly Kasey thinks back to his growing-up days at his great-grandparents’ farm in Arkansas. He looks off into the distance and says, “In fact, I wish I was still in Arkansas as a youngster right now because life is hard out here on the street.”

The somber moment is fleeting. Quickly he flashes his characteristic grin that lights up his face and reaches his eyes. His thoughts have once again turned to food. He says that since he can’t go back in time, he would be just as happy with some egg foo yung at a local Asian restaurant the next time he scrapes a few dollars together.