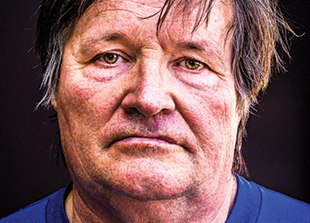 Meeting David ‘Dave’ Peters on a hot August afternoon (with its 50-50 chance of thunderstorms), I was struck by his cheerful yellow shirt that read, ‘Accentuate the Positive.’ When asked about the shirt, he replied simply, “It’s a way I can give others an optimistic message without saying a word.”

Dave Peters was born in Rhinelander, Wisconsin, but he and his twin brother Mike grew up in Eagle River, where they were raised by their grandparents Sam and Dorothy Peters. His grandfather owned a welding shop and had a strong reputation for doing good work, so people came from miles around when they needed welding done. His grandmother was a “tall, statuesque woman with a terse sense of humor” and strong opinions, a woman who always spoke her mind.

Dave and Mike spent summers in Kenosha with their mom, step dad, and four younger brothers and sisters, but returned to their grandparents’ home in Northern Wisconsin during the school years. Dave considers himself a country boy and liked living in rural northern Wisconsin. A pond near their home proved to be a perfect place for exploring, as what boy could resist turtles and frogs? He especially liked winters because he got to go skiing. It didn’t matter if it was downhill or cross-country skiing; he enjoyed it all and said he did not mind the snow or the cold.

Dave never met his father, who “ran out” before Dave and Mike were born. The story Dave heard about his father was that he had been a soldier during World War II and was wounded while helping save his platoon by taking out a machine gun nest during the Battle of the Bulge.
Dave graduated from high school in 1971. During his time in high school, he tried getting along with everyone, but he he refused to join any of the cliques, so in another way he didn’t fit in.

Independent: that’s a word Dave uses to describe himself. He thinks for himself and has always been independent, he says. He said, “If I didn’t like something someone was saying to me, I would just walk away.”

There was a time that strategy didn’t work. He attended a church called Community Bible Church. The pastor’s name was Leonard Johnson. Dave describes him as “a country preacher who made house calls.” The preacher took him fishing and he quickly learned “it’s hard to walk away when you’re in a boat.”

Dave said this minister was “like a surrogate dad to me.” Although Leonard Johnson has been gone for many years, he considers him a positive role model in his life. One thing Dave learned from Pastor Johnson was that it is better to “whisper my faith” than to shout it, because there is a better chance someone will actually listen.

After high school, Dave worked with Trees for Tomorrow, an environmental conservation camp. He worked at several restaurants, but overall he found that while Northern Wisconsin was beautiful, it lacked job opportunities. He moved to Florida, where he worked as a carpenter for his uncle who owned a construction company. Later on, he worked at a cultural arts center called La Nueva Era-Roots and Cultural Workshop.

With his interest in nature, he worked for Coastal Environmental Cleanup, a company that cleaned up oil spills. But Wisconsin called him home. Dave said he moved back to Northern Wisconsin, where his interest in the outdoors led him to work as an office manager for Wisconsin’s Environmental Decade (Clean Wisconsin) until they closed the Wausau office.

Dave kept living in Wausau for a time, even though the jobs had left town. He knew he needed to make a change and read that Madison was a place where jobs were more plentiful, so three years ago he “decided to take a leap of faith” and took a bus to Madison.

“It dumped me off in the middle of a Monday night.” He had no money and no place to go and couldn’t even find a restroom. He asked people for directions but no one offered any assistance. Then he met a young graduate student who “offered me his couch for the night” and that was his welcome to Madison.

Dave never followed politics until he moved here. It was hard to ignore politics when he came to town, because he arrived at the height of the protests when people were sleeping in the Capitol. He learned that Madison was a very political town.
Hearing all the brouhaha, Dave wanted to find out what was happening in his new city. A friend from up north had given him a pillow to use on the bus and he carried it with him when he tried to enter the Capitol. A guard stopped him and said he couldn’t bring a pillow into the Capitol because of all the people already sleeping in the rotunda.

Dave said he wasn’t going to sleep at the Capitol but he wasn’t giving up his pillow, either. He dared the guard to arrest him by saying it was ‘illegal and unconstitutional’ to tell a citizen he couldn’t enter his Capitol. He walked on inside and was not arrested.
But it sparked his interest in politics. It gave him a goal. He wants to work to eliminate homelessness in Madison. He volunteers with several organizations that seek to improve the lives for people experiencing homelessness.
Dave was a part of Occupy Madison and lived in the tent city near downtown until it was shut down. When Occupy Madison decided to get involved in the building of tiny houses, Dave joined that too. For those of you haven’t read about tiny houses in past issues of Street Pulse, Occupy Madison works to end homelessness by building tiny houses on wheels. The houses are about the size of the food carts found near downtown and on the university campus.

“The axles are about the only thing that cost money.” They use discarded pallets and other recycled materials to build tiny houses and then add insulation and electricity.

People need to donate their time and help build tiny houses to be considered for home ownership. Dave says a lottery system will be used to determine which contributor gets to live in each completed tiny house.

Dave said he also volunteers with Sanctuary, an organization that runs the storage lockers at the Social Justice Center on Williamson Street. Sanctuary is in the earliest stages of teaming up with Urban Assets to plan on developing a permanent homeless shelter.
What Dave envisions for a permanent homeless shelter is a place where each individual gets a small piece of private space, including a separate shower. He wants a place that minimizes rather than escalates stress. He says everyone deserves a place that is peaceful.

As he explained, “All people who are homeless come from stressful backgrounds and are under a tremendous amount of stress. When stress gets too strong, even little issues get amplified and it can be harder to get along. That just makes things worse for everyone.”

You can’t tell what a person is like by just looking at them. People who meet Dave may not guess for example that he is a vegetarian and likes soy milk.

As for those winters Dave so enjoyed as a child? Well, he no longer looks forward to them. “This winter,” he said, “is going to be brutal.”